PETRONAS to allocate RM430m for forward bases in Esszone, Sabah 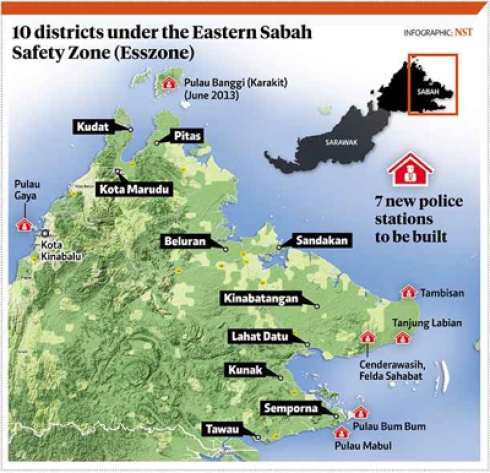 Two forward bases to be located in Sabah waters will be completed by April next year, in a move to thwart all threats and strengthen security along Malaysian waters, said Defence Minister Datuk Seri Hishammuddin Tun Hussein.

He said one of the forward bases would be at a Petronas petroleum rig which was no longer in use, and its construction was expected to cost about RM230 million.

The other forward base, costing RM200 million, would be at the Bunga Mas Lima ship.

“I want to announce today that arising from my talks with Petronas, there will be two forward bases in Sabah waters by April next year. This involves an oil rig which is no longer used while the other involves the Bunga Mas Lima ship,” said Hishammuddin.

He was speaking to reporters after officiating the Penampang Division Umno Delegates meeting here yesterday.

Also present was Penampang Division Umno head Datuk John Ambrose. Hishammuddin said both the forward bases would be equipped with a radar system, as well as patrol boats which would enable the security forces to respond quickly, in the event of a threat.

On a request by Sabah and Sarawak that the federal government give more focus to security aspects, the minister said he had brought up the matter with Prime Minister Datuk Seri Najib Tun Razak and discussed it with the finance ministry to be brought up in next year’s budget.

He agreed that in today’s borderless world, Malaysia, especially the defence ministry, not only had to be on the alert, but also needed to identify the latest and most effective technology to maintain Sabah’s security.

“I feel that Petronas can invest more in security in Sabah. I will discuss this with them, it is very important because if the area is not stable, investments in the oil and gas sector, including in exploration, would be affected,” he said.

Hishammuddin added that he would also discuss with the Brunei Government on the importance of contributions from other oil companies in ensuring security along the waters in the region, as Malaysia and Brunei faced similar threats.

“I will meet and discuss this matter with the Sultan of Brunei. I am still waiting for the new defence minister of Indonesia. In the case of the Philippines, they are working closely with us,” he said.

He stressed that the federal government never took Sabah’s security lightly but had done and would keep doing many things, including looking carefully at all the capacities and capabilities of the air base in Labuan and studying the capacity of landings and aircraft in Lahad Datu.

“We have done many things but what is important now, is whether the people of Sabah understand that the security of the state is not about whether they want to leave Malaysia but its security is from the federal government’s determination to assist.” — Bernama