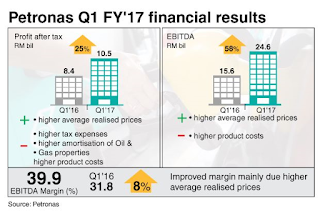 Petroliam Nasional Bhd (Petronas) chalked up a solid performance in the first quarter ended March 31, 2017 with profit after tax surging 124% to RM10.3bil from RM4.6bil a year ago due to higher oil prices and improved margins from upstream and downstream businesses.

The national oil corporation said on Friday its revenue increased by 25% to RM61.6bil from RM49.1 bil a year ago.

Earnings before interest, tax, depreciation and amortisation (Ebitda) rose by RM9bil or 58% to RM24.6bil from RM15.6bil a year ago.

During the first quarter, average dated Brent stood at US$53.78 per barrel compared with US$49.46 a barrel in the fourth quarter of 2016.

“The group’s cash flows from operations also grew by 86% cent compared to the corresponding quarter last year to RM18bil, as a result of higher average realised prices,” Petronas said in the statement.

Petronas asked to exit Myanmar in protest of Rohingya crisis 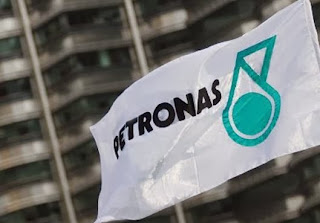 Malaysian members of parliament on Wednesday asked state energy firm Petroliam Nasional Bhd , or Petronas, to exit its Myanmar operations and investments to protest the violence against the Rohingya Muslim minority.

Petronas is one of the biggest employers in Malaysia, where Islam is the official religion, and the  country’s only Fortune 500 company. It owns several natural gas blocks in Myanmar along with a cross border pipeline that transports gas to Thailand.

Hundreds of thousands of Rohingya Muslims have fled Rakhine state in Buddhist-majority Myanmar since security forces responded to Rohingya militants’ attacks in August with a crackdown that has reportedly caused widespread killings and the burning of Rohingya villages. The United Nations has denounced the crackdown as a classic example of ethnic cleansing.