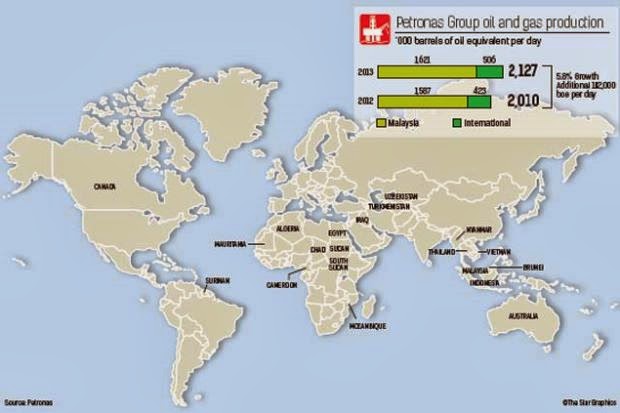 The national oil company has had to manage its portfolio delicately – especially in geo-politically charged countries, allowing it to come out ahead of many international oil companies in some of these challenging frontiers.

Petronas was the first oil and gas firm to venture into conflict-fraught South Sudan following its independence from Sudan in 2011.

As pipeline disputes between the neighbouring countries were resolved, Petronas was able to resume its pre-war production levels in record time – putting 80% of its oil back on stream in mid-2013 after a 15-month wait.

However, cultural tensions soon boiled over again, forcing Petronas to shutter its operations in two of its three fields at the end of last year.

Petronas has more than 100 employees and contractors there in three joint-operating companies.

This makes South Sudan one of its most prized international assets, contributing what industry sources believe to be a quarter of the company’s international production portfolio prior to the recent civil conflict.

“We must look at it as a long-term investment. Production from Sudan and South Sudan average about 220,000 bpd today.

“Despite zero production for many years, we didn’t have to make any impairments for our operations there because we have made so much money and the remaining value is huge.”

In Iraq, where Petronas operates the four blocks, the Garraf field delivered first oil on Aug 31, marking the first greenfield project for Iraq a decade after the war.

Estimated to deliver 230,000 bpd of oil by 2017 when in full commercial production, Petronas’ foray into Iraq began in 2010 with the signing of a 20-year production sharing contract with Japanese and Iraqi partners for Garraf.

The group has three other assets in Iraq including Halfaya, Majnoon and Badra. Its operations in Majnoon also delivered first oil in 2013, while the remaining two fields are expected to come on stream this year.

Currently producing over 500,000 bpd of oil equivalent, Petronas expects its overseas asset portfolio to grow in the mid term.

Industry sources indicate that it has hired nearly 1,500 new staff members in the past 12 months – many of whom have field exposure abroad, onshore and offshore experience and across technical and management roles.

At the same time, Wee and his team have put up various capability building facilities and programmes to ensure the group’s workforce is ready to support its business growth.

This includes the setting-up of the Petronas Unconventional Hydrocarbon Centre and the Instep Integrated Oil and Gas Training Centre.

The latter offers comprehensive hands-on courses for a wide variety of roles, including drillers, production technicians, rig operators, project managers and others.