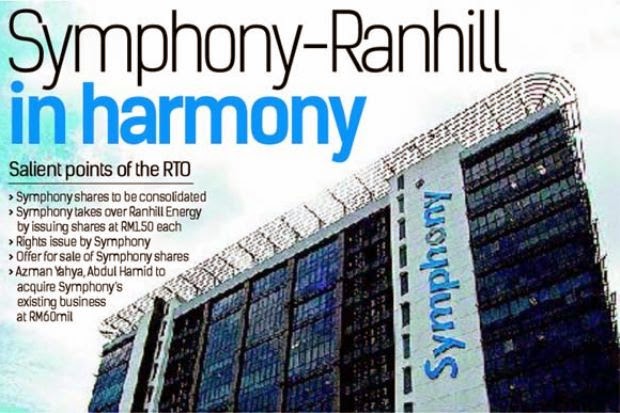 Symphony House Bhd has entered into a heads of agreement with Ranhill Energy and Resources Bhd to facilitate the listing of the latter in a reverse takeover exercise (RTO).

According to the announcement yesterday, which confirmed a report by StarBiz on the transaction, Symphony would acquire all the equity interest in Ranhill Group Sdn Bhd including its subsidiaries from Ranhill in return for new Symphony shares.

Another salient point from the agreement is that Tan Sri Mohamed Azman Yahya who is the current acting chairman and group chief executive officer of Symphony and executive director Abdul Hamid Sheikh Mohamed would buy out the existing business of the company for RM60mil in a management buyout (MBO) exercise.

No value was given to the proposed exercise as due diligence on the assets to be injected into Symphony is only expected to be completed in about two months’ time.

However, to get an inkling of the value of Ranhill Energy, during its aborted listing exercise on Bursa Malaysia last year, the company had raised some RM753mil. The funds were returned to the investors.

Share trading of Symphony, which is involved in business process outsourcing (BPO), was suspended from Monday for three days and will resume trading today.

The proposed RTO aims to provide existing shareholders of Symphony with an opportunity to benefit from the Ranhill group’s growth potential in the water, power and oil and gas businesses, according to a joint statement from both companies.

Symphony’s shareholders are expected to benefit from Ranhill Group of Companies’ experience in the energy and environment sectors, and its reliable cashflow from its contracts and concessions, it added.

According to the statement, Tan Sri Mohamed Azman Yahya who is the current acting chairman and group chief executive officer of Symphony is committed to remain as a shareholder and helm Symphony post the RTO.

Upon completion of the proposed RTO, Azman will continue his services as chairman and has “volunteered” to a share moratorium in respect of Symphony shares held by him prior to the completion of a proposed offering of new shares, for three years from the date of such completion.

The proposed offering to be undertaken by Symphony involves a renounceable rights issue on the basis of one new share for every existing one.

Ranhill, its shareholders and persons acting in concert intend to seek an exemption from the obligation to undertake a mandatory general offer for all the remaining Symphony shares not already owned by them upon completion of the proposed RTO.

According to the statement, funds raised from the proposed offering are intended to be used for, among others, paring down debts, business expansion, working capital as well as to disburse expenses related to the proposal.

Concurrent with the proposed offering, certain shareholders of Ranhill Energy will undertake an offer for sale of their Symphony shares.

Lastly, there is also a proposed MBO by the current management team headed by Azman and Hamid of all the equity interest in Symphony’s existing group of companies for RM60mil cash.

Save and except for the proposed MBO, all the above are inter-conditional upon each other. Upon completion of the entire exercise, Symphony will continue to be listed on the Main Market of Bursa.

The entire exercise will be subject to, among others, the execution of legally binding agreements for the proposal, the approval of the Securities Commission (SC), Bursa and the shareholders of Symphony and Ranhill.

Ranhill’s plan to list was put on hold last year after it emerged that there had been a disclosure breach related to the suspension of the licences of its affiliate company, Perunding Ranhill Worley Sdn Bhd, by Petroliam Nasional Bhd for an indefinite period.

Ranhill was supposed to list on Bursa on July 31, with about 70% of its RM753mil IPO proceeds to be utilised for the repayment of borrowings. The SC had instructed the company to postpone its IPO indefinitely on July 25 in view of the non-disclosure issue.

The following day, it announced that it had terminated its IPO.

Symphony recorded a net loss of RM40.84mil for its fourth quarter ended Dec 31, 2013, compared with a net loss of RM37.66mil in the corresponding period, which was mainly attributed to an impairment made in respect of its BPO business of RM40.6mil.

In a separate announcement yesterday, Symphony said non-executive director Datuk Mohd Omar Mustapha had resigned “due to potential conflict of interest arising from a corporate exercise to be undertaken by the company.”

He has also resigned as a member of the firm’s audit committee.