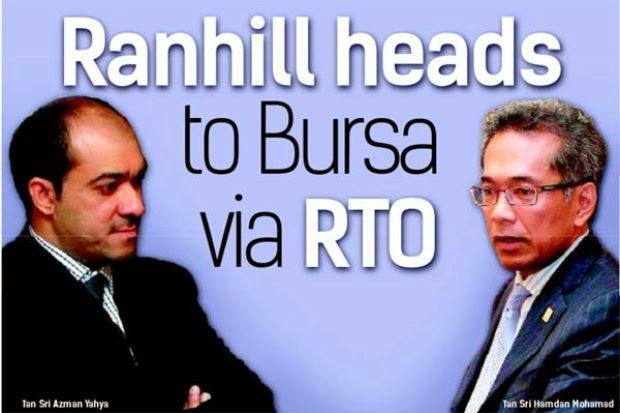 After aborting its controversial initial public offering (IPO), Ranhill Energy and Resources Bhd is heading to a listing on Bursa Malaysia via a reverse takeover (RTO) of Symphony House Bhd.

“It will provide Ranhill a shortcut to the equity market. It’s also a cheaper option compared with an IPO and less time consuming.

“However, it would also mean absorbing whatever liabilities that the company might own,” said an analyst.

Sources said Azman would remain a shareholder of Symphony after the reverse takeover by Ranhill, which has businesses in energy and utilities.

Symphony, which had requested for a trading halt last Wednesday, has fuelled speculation that it could be the potential target of a RTO exercise. It didn’t make an announcement yesterday but one is expected this week.

Ranhill, which recorded a net profit of RM282.23mil on revenue of RM1.99bil for its financial year ended Dec 31, 2012, withdrew its IPO following issues of disclosure transgression.

Ranhill’s IPO plans were put on hold last year after it emerged there had been a disclosure breach related to the suspension of the licences of its affiliate company, Perunding Ranhill Worley Sdn Bhd, by Petroliam Nasional Bhd for an indefinite period.

Subsequently, the Securities Commission (SC) imposed a fine of RM200,000 on the company, while its substantial shareholder Tan Sri Hamdan Mohamad was reprimanded and fined RM300,000 for the failure to disclose the licensing issue.

Ranhill was supposed to list on Bursa on July 31, with about 70% of its RM753mil IPO proceeds to be utilised for the repayment of borrowings. The SC had instructed the company to postpone its IPO indefinitely on July 25 in view of the non-disclosure issue.

The following day, Ranhill announced that it had terminated its IPO.

According to the company’s prospectus, it had debts of RM1.93bil and a gearing of 1.61 times as at end December 2012.

Symphony recorded a net loss of RM40.84mil for its fourth quarter ended Dec 31, 2013, compared with a net loss of RM37.66mil in the corresponding period, which was mainly attributed to an impairment made in respect of its BPO business of RM40.6mil.

In its notes accompanying its fourth quarter earnings, Symphony said it expected to complete the sale of Symphony BPO Solutions Sdn Bhd by the first quarter of 2014.

“Upon completion of this sale, the group still has the remaining international BPO business for payroll solutions, which will focus on completing the implementation of secured projects in Japan and Europe.

“On the domestic outsourcing business which remains in the group’s core continuing business, we expect the stock market to be in a positive bias for the remaining period of 2014, which will provide moderate growth for these businesses,” it said.