Barakah Offshore Petroleum Bhd's founder Nik Hamdan Daud has resigned from his posts as group president and chief executive officer with immediate effect.The company, in a filing with Bursa Malaysia yesterday, said Nik Hamdan had left the company due to "personal reasons".

Nik Hamdan is the single largest shareholder in Barakah with a 33% stake.

To take over his role, the company has appointed Abdul Rahim Awang as acting group CEO with immediate effect until the appointment of a new group president and CEO is made.

Barakah is currently in the midst of restructuring its debts.

The company and its subsidiaries recorded total liabilities of RM335.6mil in its fourth quarter ended Dec 31, 2018.

"The company is still in the midst of formulating a debt-restructuring scheme to settle the group's debt. At this juncture, the actual amount of debt to be restructured has yet to be determined," it said in a statement on March 18.

On March 6, the High Court of Malaya granted that the restraining order be extended for 90 days from Jan 14.

The restraining order was applied as one of the proactive measures taken by Barakah to manage the debt levels of the company and its wholly owned subsidiary – PBJV Group Sdn Bhd.

Sarawak oil and gas players are set to benefit as the state transitions into the new administration of its oil resources under Petroleum Sarawak Bhd (Petros), with plans to increase local participation in the industry.

By end-2019, it said, Petros would take firm action to implement the state's mandate, particularly in relation to revenue sharing and local participation.

"We believe this is necessary to kick start delayed greenfield projects," it said in a note.

The research house, which maintained its "market weight" stance on the sector, said Petros CEO Sauu Kakok clarified during the seminar that their key targets included driving more share of revenue from Sarawak O&G resources and boosting participation of Sarawakians. Petros, it said, was actively working towards meeting the "hard target timeline" of Dec 31 for measures including setting up governance policies.

"This implies that the one-year grace period for Petronas, Putrajaya (and its key advisors), and Sarawak state will conclude.

"We understand further delays are unlikely as all stakeholders are working hard to reach firm agreements," the research house said.

A technical session during the seminar revealed that the Sarawak basin has 23% of Malaysia's oil and 51% of natural gas.

It noted that Petroliam Nasional Bhd (Petronas) would focus on overseas upstream capex, while domestic upstream capex is set to improve from RM12bil in 2018 to RM15bil in 2019.

In a filing with Bursa Malaysia, the company said the new wins included a submarine rescue service contract for the Royal Australian Navy.

The group has also marked a new entry into Egypt with a contract for works in the Gulf of Suez, through a subcontract for new subsea pipelines secured by its subsidiary, Sapura Offshore Sdn Bhd, from Pan Marine Petroleum Services Company.

"The contracts demonstrate Sapura Energy's continued pursuit to deepen its presence in existing core markets, breaking into new markets and expanding its scope of services.

"The growing order book is expected to increase asset utilisation for the group and contribute to improving its financial performance," it said.

The list of contracts also include Sapura Offshore's joint-venture with PT Timas Suplindo on a contract for engineering, procurement, construction and installation works of two 16-inch diameter offshore rigid pipelines from Indonesia's Jangkrik facility to a future manifold near the Merakes drilling centres.

Sapura Energy currently has 10 key operating centres around the globe. 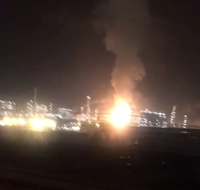 "We will provide additional information in due course, as the investigation is still being carried out," it said.

In a statement today, it said Malaysia Marine and Heavy Engineering Sdn Bhd, in a joint venture agreement with Hiap Seng Engineering Ltd, was awarded a master service agreement that covers integrated plant turnaround works and daily maintenance work on mechanical static for Petronas' plants, across the group.

The agreement is valid for a period of five years, and Petronas has an option to extend it. No contract value was mentioned in the statement.

"This long-term project award is aligned with our strategy to venture into new businesses that provides recurring orders in ensuring MHB's growth sustainability.

We are committed to execute the work efficiently, without compromising on safety and quality," said the group's managing director and chief executive officer, Wan Mashitah Wan Abdullah Sani.

Airbus Helicopters, the world's leading helicopter manufacturer, is making Malaysia its maintenance, repair and overhaul (MRO) hub in Southeast Asia, following the integration of its Subang facility with its network of MRO facilities in the region.

Chief executive officer (CEO) Bruno Even said the Subang facility was previously offering only MRO services to domestic clients and supported only selected types of helicopters.

He said the type of helicopters supported by the expanded centre will include a wide range of civil and military rotorcraft such as the AS365, H120, H130, H145, H155, H225, H225M and AS555SN Fennec for all customers regionally.

He said given the helicopter industry's positive global prospects in the next 20 years, with a worldwide demand for up to 22,000 helicopters and Asia Pacific accounting for 35% of the demand, Airbus Helicopters planned to position itself in a strategic market like Malaysia.

"The main driver of the whole helicopter market will be Asia and that's important to invest in the capability here and capture the bulk of this growth, as well as to provide the right level of service.

"This is why we consider Malaysia as a key centre in Asia. Airbus have succeeded in developing a strong technical base and competency here, and we want to leverage on it," he told Bernama and the New Straits Times in an exclusive interview here today.

Even is on his maiden visit as CEO to Kuala Lumpur.
With about 50% of the market share in Malaysia and over 20% in Asia Pacific, Airbus Helicopter plans to further expand their market.

The integration of the Subang facility with its MRO network was part of the Airbus Helicopters' commitment to expand its footprint in Malaysia, and offers more products and services to customers around the world.

The facility was also expanded to include the opening of a new helicopter completion and delivery centre, as well as the addition of second flight crew training simulator for the AS365 Dauphin helicopter to the existing H225 full flight simulator.

Airbus Malaysia head of country Raymond Lim said helicopters in the region will be delivered from the new centre in Subang, which is currently at the final stages of completion, pending certification from the Civil Aviation Authority of Malaysia (CAAM).

He expects the new delivery centre, which has the capacity to deliver up to 20 helicopters annually, to be certified by CAAM by month-end.

Meanwhile, Even said Malaysia is the only country outside of Europe that has a flight simulator for the medium-weight multipurpose twin-engine helicopter AS365 Dauphin.

He said Airbus Helicopters' customers in the military, parapublic and civil sectors will come to Subang for training and the United Arab Emirates Navy have started using the simulator for training since it began operations on April 1

Icon Offshore, in a filing with Bursa Malaysia today, said the commencement date for the work order, for its Tanjung Pinang 2 vessel, will commence on March 7, 2019 for a period of 180 days with an extension option of 180 days.

Icon Offshore said it would be on a call out basis valid for a period of three years with an extension option of one year plus one year.

The company said the contracts are expected to contribute positively to the earnings, order book and net assets of the group for the financial year ending December 31, 2019 and beyond.

One of the contracts is to provide offshore support vessels to O&G companies to support their production operations in Malaysian waters.

The contract valued at RM169 million was for a primary period of three years with an extension option of up to two years of one year each, it said in a filing to Bursa Malaysia.

The other job worth RM106 million was to provide two platform supply vessels to ExxonMobil Exploration and Production Malaysia Inc for its production operations, the company said.

The TNAG pipeline system will be installed from the new TNAG unmanned wellhead platform via a 60km, 12-inch pipeline and fibre optic control cable, the support service provider noted in an exchange filing yesterday.

The rigid pipeline will be the first in offshore Malaysia installed using mechanical connectors — specifically, the NOV Tuboscope Zap-Lok connection — and tied to existing processing facilities on the Berantai FPSO (floating, production, storage and offloading vessel) and the wellhead platform with flexible risers connected to the rigid pipeline with diverless connections.

The contract commenced on March 5, 2019, and is targeted for completion in the fourth quarter of the year, Alam Maritim's filing stated. 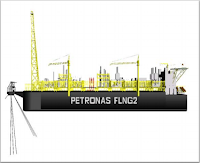 Petroliam Nasional Bhd or Petronas expects to have its second floating liquefied natural gas (LNG) facility in Malaysia ready by the first quarter of next year, its chief executive Wan Zulkiflee told the LNG2019 conference in Shanghai on Tuesday.

Malaysia had said in October last year that the facility would be operational by July 2020.