Oil and gas deals to be sealed at OTC Asia 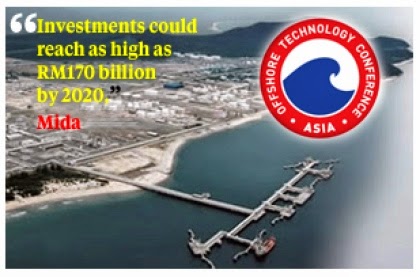 A number of oil and gas deals are expected to be inked at the sidelines of this week’s Offshore Technology Conference Asia 2014 (OTC Asia) conference, industry sources say.

OTC Asia is a key trade event for the industry being held for the first time in Kuala Lumpur.

Among the deals that could be signed are the risk service contracts (RSCs) for Uzma Bhd, Vestigo Petroleum Sdn Bhd and their respective international partners, sources said.

Vestigo, an arm of Petroliam Nasional Bhd (Petronas), was set up to oversee the development of marginal oilfields.

It has been speculated that Uzma and its international partner are the front runners for the RSC for the Tanjung Baram field in Sarawak, worth an estimated US$100mil to US$200mil (RM330mil to RM660mil).

Vestigo has been slated to secure RSCs for the Tembikai and Cenang gas fields off the coast of Terengganu.

Scomi Energy Services Bhd has also been flagged as a potential RSC winner, although sources are unsure on the timing of the signing of this deal.

StarBiz had reported in January that Scomi Energy, Vestigo and Australia-based Octanex NL were close to securing an RSC from Petronas for the Ophir cluster near Terengganu.

Uzma, is understood to have tied up with a British oilfield services firm in its bid.

As part of Petronas’ requirements, bidders for the RSCs must consist of established foreign oil and gas players alongside proven local partners.

Of the 106 fields earmarked as “marginal”, with estimated reserves of 580 million barrels of oil equivalent, only 27 are deemed to have commercial value.

So far, four RSCs have been dished out to local-foreign consortiums. Three are already in production.

OTC Asia is one of the largest technical conferences in the world that addresses the development of offshore resources in the fields of drilling, exploration, production and environmental protection.

Petronas, one of OTC Asia 2014’s main sponsors, was also expected to make its final investment decision soon for the RM60bil Refinery and Petrochemicals Integrated Development complex in Pengerang, Johor, an anchor project under the Economic Transformation Programme.

An announcement is due to be made early next month, industry observers said.

Uzma was last quoted down one sen to RM6.29 while Scomi Energy shed three sen to close at RM1.03.