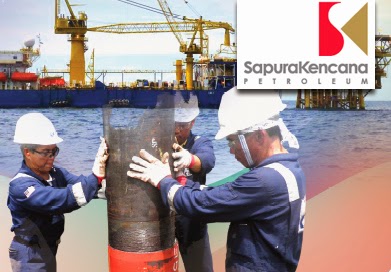 "For example, the group's recent acquisition of the Seadrill tender-rig business for US$3 billion has significantly increased our profit for financial year 2014 (FY14).

"In FY14, earnings from drilling and energy service division surged to RM969 million from RM275 million in the previous year," he told the media on the company's FY14 financial results.

Shahril said the group has also concluded a RM16.5 billion (US$5 billion) refinancing deal with 13 local, regional and international banks.

The refinancing programme was put in place to substitute and streamline facilities that were inherited following the merger of SapuraCrest Petroleum and Kencana Petroleum in 2012.

The deal was also undertaken for the financing of the group's two most recent acquisitions -- Seadrill tender-rig business -- which has since been renamed as SapuraKencana Drilling and the purchase of the entire equity interest in Newfield Malaysia Holding Inc.

Shahril said the borrowing was actually backed by assets and contracts for over 85 per cent.

"Soon there will be cashflow coming in to be able to repay the debt. Our gearing at the moment is sitting at 1.2 times (as at Jan 31, 2014), but after three years, it should drop below one, which is back to pre-merger day of gearing.

"Moving forward, we expect contributions from Newfield, and that surely will boost our profit again," he added.

The revenue for the integrated oil and gas services provider for the year ended Jan 31, 2014 surged 21 per cent to RM8.3 billion from RM6.9 billion last year. -- BERNAMA