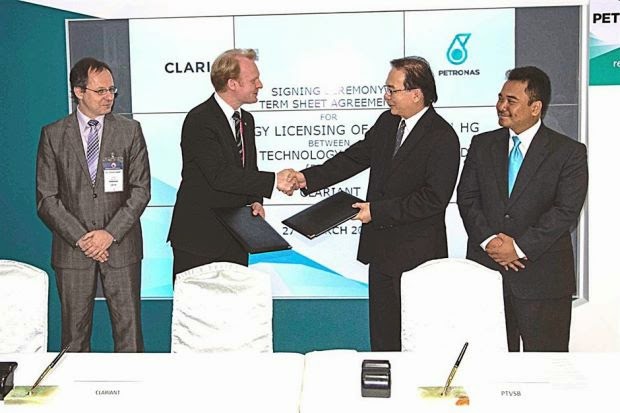 “With the sales-based agreement, every time the product is sold, Clariant will pay a licensing fee to Petronas, on a yearly basis,” said PTVSB chairman Dr Colin Wong Hee Huing, who is also the vice-president of Petronas’ technology and engineering division, after the signing ceremony in conjunction with the Offshore Technology Conference Asia 2014.

The licensing collaboration between the two companies is expected to span over a five-year period.

“Clariant expects to reach a global market share of between 25% and 30% by the next five years,” Wong said.

The HycaPure Hg technology developed by Petronas has already been used at its gas-processing plants for more than two years, which according to Wong has demonstrated a high adsorbent capacity and stable performance.

“This licensing collaboration will allow the technology to go beyond our facilities and gain valuable access to the international market,” he added in a statement.

Bernama has reported that two HycaPure pilot plants will be commissioned this year – one for wet gas at the Malaysia LNG plant in Bintulu, Sarawak, and another for condensates at the Onshore Gas Terminal in Kerteh.

PTVSB said HycaPure Hg was capable of effectively removing elemental, organic and inorganic mercury from natural gas with an expected service lifespan up to three times greater than its competitors.

In addition, it is also capable of handling mercury concentration surges in the gas stream during pipeline pigging activities, which is crucial in ensuring year-round maximum equipment protection.