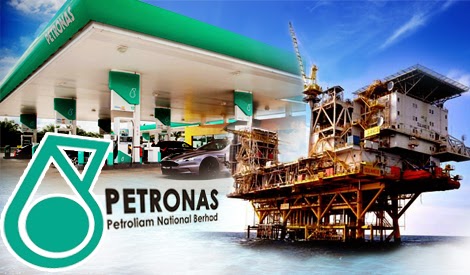 Petronas production of oil and gas last year grew an unprecedented 5.8%, double its target of 3% per annum and beating some of the world’s biggest names in the industry.

Despite lower currency exchange rates, naturally reducing domestic reserves and geopolitical tensions in the Middle East and South Sudan, the group’s total production edged up 5.8% to 2.21 million barrels of oil equivalent per day (boepd) from 2.08 million boepd the year before.

Petronas saw improved production from its local as well as international operations. In Malaysia, production from existing and new fields totalled over 1.62 million boepd.

Overseas, its facilities in the now independent South Sudan resumed production amid intermittent clashes, while two of its fields in Iraq – Garraf and Majnoon – hit first oil. Its two remaining fields there are expected to come on stream by this year.

Meanwhile, a prolonged cold snap in North America last winter was a boon for Petronas’ LNG sales out of Canada.

Petronas also expanded its portfolio with 15 discoveries last year across Brunei, Indonesia, Australia and Malaysia, and 37 improved oil and gas recovery efforts, of which 24 were in Malaysia and 13 abroad.

In the same period, the national oil company achieved first production in 22 fields, nine of them overseas.

Major gas discoveries helped push its local resources to 22.6 billion boe as of Jan 1, from 22.2 billion boe the previous year.

In fact, Petronas recorded the highest ever production of LNG by a public listed corporation in a single year at 25.96 million tonnes.

Total group resources stood at 32.8 billion boe, versus 32.6 billion boe in 2012. This means its international resources fell slightly to 10.2 billion boe against 10.4 billion boe, which Petronas attributed to its relinquishing of blocks in Venezuela, Uzbekistan, Oman and Cuba.

In a bid to “high-grade” its assets, the oil giant exited four countries, namely Venezuela, Cuba, Oman and Sierra Leone, and ventured into new areas such as Suriname.

It was the first instance of an Asian investor launching a buyout of its Canadian partner in a gas project and had to go under the microscope of competition authorities.

Progress Energy was then a listed company in Canada. Petronas had offered its shareholders a price of C$22 per share – a hefty 90% premium over Progress’ share price at that time.

Now Petronas is gradually paring down its interest in Progress to share infrastructure costs and secure long-term offtake agreements for future LNG supplies.

Reuters had reported last July that Petronas was in discussions with China Petroleum & Chemical Corp for the latter to buy a 10% stake in Progress Energy, but no announcement on this has been made yet.

Earlier this month, state-owned Indian Oil Corp agreed to take up a 10% stake in Progress at an undisclosed price.

The deal with Petronas will give India’s biggest refiner the right to 1.2 million tonnes of LNG per year for two decades.

Petronas had already sold 10% and 3% of the Canadian gas producer to Japan Petroleum Exploration and Petroleum Brunei respectively, leaving it with a 77% interest.

Although the pricing was not known, sources say the amount paid by Indian Oil Corp valued Progress’ assets at almost double what Petronas forked out in 2012, silencing critics who had accused Petronas of overpaying.

Petronas intends to maintain a controlling stake of 50% in Progress.