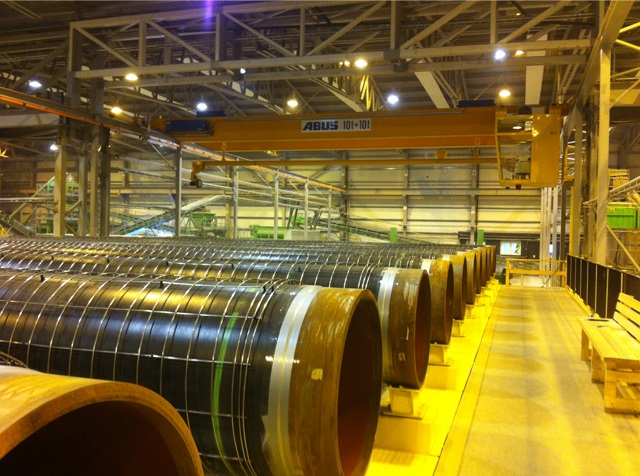 Concrete weight coating done by Wasco will add stability of the pipeline on the seabed. Wasco is conducting the work in its plant in Kotka, Finland, where the pipe coating and logistics operations will employ 300 persons during peak production.

The Nord Stream 2 company, a said on Friday that almost half of the 200,000 pipes needed for the entire project would be concrete weight coated in Wasco’s plant in the Port of HaminaKotka.

Also, Wasco already hired 195 people for its coating plant operations, and during peak production, it will employ up to 300 workers directly and around 100 persons indirectly. Coating for the Nord Stream 2 project will continue in Kotka until late 2018.

To date, Wasco’s Kotka storage yard has received over 35,000 pipes from the pipe mills, and once the pipes have been coated with concrete, part of them will be stored indirectly in Kotka and the rest will be stored in Koverhar, Finland. During construction, coated pipes will be fed from the storage yards to the pipelay vessels.

Concrete weight coating increases pipeline stability on the seabed, as the concrete doubles to 24 tonnes the weight of each 12 meter, 48-inch diameter pipe joint. The coating also protects the pipes from external damage when they are stored, transported, and lowered onto the seabed.

The company added that the start of coating in Kotka is considered yet another milestone for the Nord Stream 2 project and that the company has already closed all major contracts.

To remind, Wasco signed the contract with Nord Stream 2 for the provision of storage and concrete weight coating for approximately 2,400 km of pipes in July last year.