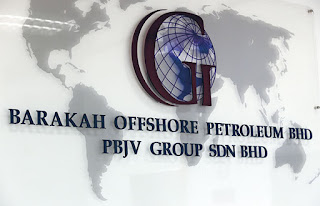 Barakah Offshore Petroleum Bhd had expected to maintain its profitability in the financial year ended Dec 31, 2017 but delays in its Pengerang gas pipeline project in Johor had set the company back almost a year, resulting in losses.

However, vice-president and chief corporate officer Abdul Rahim Awang is keen to put all this behind the company and start 2018 on a clean slate. He anticipates Barakah will return to the black in the first quarter ending March 31.

“Our losses will be reflected over two quarters, mainly from our Pengerang pipeline project and firefighting water system. The work was delayed due to site issues. A portion of the site was not given to us in time to execute so we were not able to connect the system, which runs through the whole area.

“It is now almost completed, but the extension was for almost a year. As a result, the billing was impacted. By this quarter we will clear everything up, and start 2018 on a clean slate.