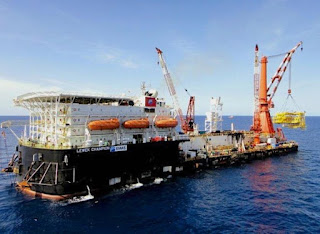 Petronas has invited a select group of offshore contractors to bid for a 2018 season of transportation and installation work.

The workscope up for grabs is understood to be linked to the Shell-E6 development, plus Petronas Carigali’s Anjung project.

It is the next installment of the Pan Malaysia transportation and installation programme for 2017 and 2018.

Sapura Energy's subsidiary TL Offshore landed a Pan Malaysia contract earlier this year from Petronas for the transport and install of platform structures and pipelines and associated works for a duration of one year covering 2017.

In the past, Petronas has awarded multi-year Pan Malaysia contracts, but this time has taken a different approach whereby a panel of contractors has been selected to bid for each scope that comes up.

These companies have been asked to submit offers imminently for the Shell-E6 platform installation and the Shell-E6 subsea pipeline — the latter is available only to the local players.

The scope also includes the Anjung platform and pipeline, though this is likely to be a 2019 job given the platform fabrication contract has not been let yet, said sources, who added the 2018 scope is likely to contain options for the decommissioning of platforms.

Sapura and Barakah both provided insights recently on the value of the Pan Malaysia work.

Sapura said it completed Pan Malaysia work in 2016 that entailed the installation of 86 kilometres of pipelines and lifting 6324 tonnes of various jackets and topsides.

“We also made considerable progress on our long-term Pan Malaysia contract with ExxonMobil Malaysia, which includes the Tapis Enhanced Oil Recovery package," the company said.

"The project, comprising brownfield works, platform modifications, upgrading and rejuvenation, was a key contributor to (our) revenue performance (for the 2016 financial year).”

Barakah said its PBJV subsidiary completed almost 900 million ringgit (US$210 million) worth of work in the previous Pan Malaysia season between 2014 and 2016, and “we are reasonably optimistic of securing project orders in this new cycle that will last until 2018”.

TL Offshore has had a good start to 2017. In January it was awarded a sub-contract by Hyundai Heavy Industries to transport and install a jacket, foundation piles and bridge structure for the Bardegg-2 and Baronia enhanced oil recovery project.

It was also awarded a transportation and installation job by Repsol for a pipeline, substructure and topside for the Bunga Pakma project.