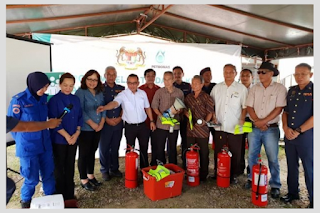 MIRI: The villagers living along the Sarawak-Sabah interstate gas-pipe route in Lawas district of northern Sarawak are being trained to deal with any possible fire-explosion incidents.
Sarawak Fire and Rescue Department and Petronas are initiating an action-plan for the villagers whose settlements are located along the huge pipeline.
The Fire and Rescue Department, in its latest updates, said it had deployed personnel to meet the villagers.
"Together with Petronas, we have drawn up an action plan on safety aspects for villagers living along the gas pipe route.
On Jan 10 last year, there was an eruption along the section of the giant pipeline near the Long Luping settlement, located adjacent of the Sarawak-Sabah border.
That was the second time in four years that the pipeline had erupted.
Petronas carried out a thorough check of the pipes after the incident.
Apart from Long Luping, there are populated settlements of Long Semadoh and Long Sukang, and then the Lawas hinterland where the pipes connect to the Baram side and towards Miri and Bintulu.
The pipeline is to channel gas from Kimanis in interior Sabah to Bintulu port in northern Sarawak for processing and export.
The pipeline was a RM4bil project by Petronas that started about 10 years ago.
The entire length of the pipeline, snaking through the rural frontiers, is 600km.
TheStar
Newer Post Older Post Home