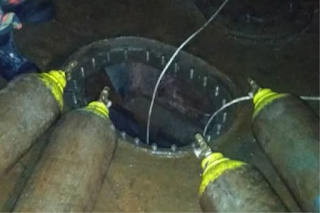 Two shipyard workers died in Sibu while five others were found unconscious after they were exposed to poisonous gas while repairing a tugboat.

The dead, according to State Fire and Rescue Department, were identified as Aktar and Maznu, both from Bangladesh.

Another Bangladeshi and four Indonesians who were lifted up by firemen from inside the hull of the tugboat were unconscious.

They have been admitted to the hospital for treatment.

All of the seven workers had gone down to the hull of the tugboat to do repair works.

However, they were exposed to shielding gas used for welding work.

They were lifted out of the boat by firemen using ropes and given immediate treatment by paramedics.
Two of them were pronounced dead.
Newer Post Older Post Home