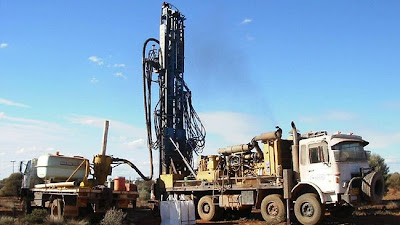 Rare earths mining can pose radioactive danger via thorium, found in the raw materials.
A LYNAS rare-earths refinery in Malaysia faces strict regulating as opposition critics warn of the threat from radioactive pollution.

Malaysia said a $US230 million ($228.25m) refinery being built by Australian miner Lynas to process rare earth materials - critical for the manufacture of hi-tech goods - would be strictly regulated , but critics said yesterday that the risk of radioactive pollution was real.

The plant under construction in the state of Pahang is believed to be the first such facility outside China in decades - and aims to reduce Beijing's monopoly on the global supply of 17 rare earth metals essential for making products like flatscreen TVs, mobile phones, hybrid cars and even weaponry.

Critics worry about health and environmental risks posed by low-level radioactive waste from the site, and cite bitter lessons from a rare earth plant of Mitsubishi Chemicals that is still undergoing a massive clean-up after shutting down in 1992.

The Malaysian Atomic Energy Licensing Board gave Lynas permission to construct the facility last year, but has not granted it an operation licence yet.

The agency’s director-general, Raja Abdul Aziz Raja Adnan, said: “The board is regulating it according to international standards and even beyond. We haven't begun licensing their (operations). They will have to demonstrate how they would treat the by-products and that would be assessed again.”

Lynas has defended the plant as environmentally safe and having ultra-modern pollution controls.

The Australian miner will refine slightly radioactive ore from its Mount Weld mine in Western Australia, which will be trucked to Fremantle and transported by container ship from there.

Lynas says the refinery is expected to be operational late this year and could meet nearly on third of world demand for rare earths, excluding China’s needs.

The US, Canada and Australia have rare earths but stopped mining them in the 1990s as lower-cost Chinese supplies became available. China has about 30 per cent of rare earths deposits but accounts for 97 per cent of production.

Beijing announced in 2009 that it would reduce rare-earth exports to curb environmental damage and conserve supplies.

Manufacturers were alarmed when China temporarily blocked shipments to Japan last year, during a dispute over islands claimed by both governments.

Concerns over China’s grip on rare earths have led countries on a hunt for alternative sources.

Decreasing supply and strong demand sparked a surge in rare earths prices, prompting companies in the US and Australia to start work on developing or reopening rare earths mines.

Malaysia's last rare earth refinery, at Bukit Merah in Perak state, opened in 1985 but shuttered seven years later following protests and claims that it caused birth defects and leukaemia among residents nearby. It remains one of Asia's largest radioactive waste cleanup sites.

Lynas told AP the Malaysian plant “will set a precedent for leadership in environmental performance with a new global benchmark in rare earths processing”.

It said the radioactive element, thorium, in its raw material from Mount Weld was 50 times lower than that in Bukit Merah. Lynas also said waste products with low levels of thorium could be converted into safe by-products such as cement aggregate for road construction.

“In practical terms, at these levels, exposure to radiation is less than taking a flight on a commercial airline or using a mobile phone,” it said.

The Australian miner said it has agreed to place funds with the Malaysian government to ensure safe management of any remaining residue once the plant stops operations, but didn't give details.

Lynas has inked an agreement to supply up to 70 per cent of its output to Japan and has said the rare earths will be shipped directly to that country, as well as the US and Europe.

Malaysian opposition politician Fuziah Salleh, who has lobbied against the Lynas plant since 2008, said yesterday there were fears that plant wastewater could seep into the waterbed, polluting the nearby river and sea and harming the fishing industry.

She also questioned how the project would benefit Malaysia since Lynas was granted a 12-year tax break and hiring would be limited since the plant is not labour-intensive.

“Malaysia will just become a dumping ground. We will not accept toxic waste being dumped on our shores,” she said.

Gurmit Singh, who heads the Centre for Environment, Technology and Development, called for an independent assessment of the radiation risks at the site.

“The government has been secretive in releasing any data about the radiation level in Bukit Merah to the public. We want accountancy and transparency,” he said.