The maligned oil giant confirmed it was to sue the firms for $40 billion (27.4 billion euros) in damages at federal court in New Orleans over their alleged role in the fatal explosion.

BP claimed in a statement that Swiss-based company Transocean "missed critical signs that hydrocarbons were flowing up the riser and failed to take appropriate actions".
"As the owner and operator of the Deepwater Horizon rig, Transocean is a 'responsible party' under the Oil Pollution Act and should therefore contribute to addressing economic and environmental damage sustained in the Gulf Coast," it added.

The British group said in a separate statement they were also suing US firm Cameron International, the makers of a blowout preventer (BOP) which BP believes failed in the lead up to last year's spill. 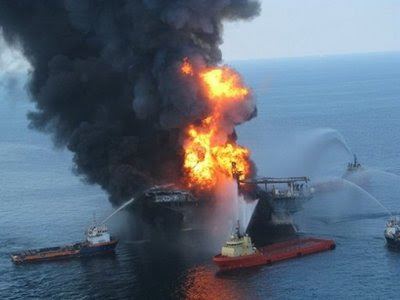 According to a BP statement, one of the BOP's "blind shear rams", which was meant to cut the faulty drill pipe and seal the well, failed to close fully due to a piece of trapped drill pipe, precipitating the April 20 disaster.

"The Presidential Commission and BP's internal investigation found that the Deepwater Horizon accident was the result of multiple causes involving multiple parties including the BOP's failure," the statement said.

Cameron has filed counter-claims and maintains its equipment was not to blame.
The blast killed 11 people and sent some 4.9 million barrels of oil gushing into the Gulf over a three-month period, wreaking havoc on the region's environment and economy.

BP vowed to make the people affected by the Gulf oil spill "whole" and created a 20-billion-dollar trust fund, its quasi-independent claims facility has paid 3.9 billion dollars to 177,000 claimants.